Resources for genealogy in the Philippines

One of the most useful online resources is the Philippines Research Outline [PDF] of the LDS. The guide discusses what records are available and how to use them. It is a bit outdated, though – its focus is on research in family history centers or possibly on location, and ignores the internet. But the LDS has more on their Philippines wiki page.

The Katálogo ng mga Apelyidong Pilipino, or Catalog of Filipino Names, contains an interesting discussion on how the Filipino’s got their surnames, and a list of truly Filipino surnames, without Spanish roots. 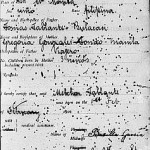 As far as I know, only the LDS has online records (available via Family search, see the Philippines page). From time to time they add new collections, or update existing ones. Most of them are far from complete, though.

The main collections are:

The Philippines Research Outline that I mentioned above contains a very useful record selector. It is clear from this record selector that to find births, deaths, marriages or parents (the basic data of the family tree) we need to look at the civil registration and church records. Secondary sources include the census, military records, cemeteries, and probate records.

The National Statistics Office (NSO) maintains and keeps the civil registration since 1932 (the date the civil register was introduced). Many records from 1932-1945 were lost in the second world war.

The Family History Library has filmed all NSO records and some other records, e.g. Copies of civil registration, 1922-1931, Kawayan, Leyte.

The FHL does have church records, but not from all areas. If you need records from rural areas you need to find out if they still exist, where they are kept, and if you can consult them there. Try to get in touch with the parish administration to find out which records they have.

The Records Management and Archives Office has cemetery records in its collection, which are filmed by the FHL. I expect these are mostly from the Manila region: I doubt that cemetery records from small villages in rural areas ended up in Manila (if these were even kept at all). The FHL catalog confirms that.

For rural areas, you may need to visit the cemetery to get any information. Or try writing to the local parish administration. If you want to visit a village graveyard, anyone in the village can tell you where it is. With a little luck, there is some staff roaming around the graveyard who can help you locate your ancestor’s grave.

The Records Management and Archives Office, the Philippines’ equivalent of the National Archives, keeps census records. These are filmed by the FHL. Censuses are not indexed yet. In the 19th century censuses covered Luzon and the central Visayas region.

The Rootsweb mailing list for the Philippines is very quiet, but there is some activity on the Ancestry Message Board.

I did not find the resources listed below very useful, but since there are so few resources for genealogy in the Philippines I list them anyway.

Genealogy in the Philippines on About.com lists only a handful of resources. The page is outdated, and at least one link is broken.

WVR’s Philippines Genealogy Search claims to search “90 websites related to doing genealogy in Philippines”, but I can’t seem to find anything useful on it.

The Philippines Genealogy Web Project, part of the WorldGenWeb project, was hosted on the now defunct Geocities. A copy of the site can still be consulted at Reocities, but the site, last updated in 2001, is hopelessly outdated.

Blogs on genealogy in the Philippines

I am aware of just a few blogs on Philippines genealogy, including my own:

A word on language

The official languages of the Philippines are English and Tagalog, and both are widely spoken. Modern sources will be in these languages (mostly English, I expect). Tagalog is also the language of the Manila region, people in other regions speak their own local language or dialect.

Before the Spanish-American war in 1898 the Philippines were part of the Spanish empire, so older church records are usually in Spanish.

According to the Philippines Research Outline, you may also find records in Latin, French, Dutch, and Hebrew.