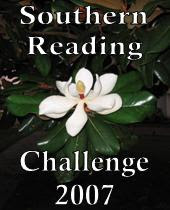 The challenge: Read three Southern books. The books must contain a Southern setting by a Southern author. The challenge is hosted by Maggie of Maggie reads. Maggie defined the Southern region with a helpful map (just for me, she told me). Apparently, “south” refers to the south-east (no, not the south) of the U.S. Why Virginia is “South”, and Tenessee even “Deep south”, while southern states like New Mexico and Arizona are not southern at all, will always be beyond me.

The three Southern masterpieces I selected: